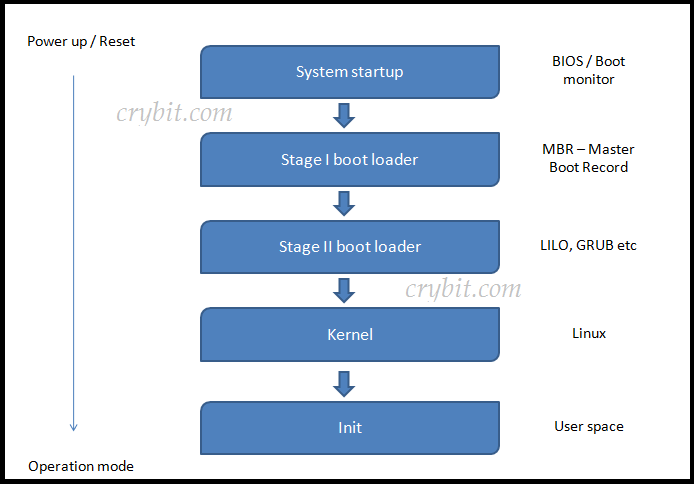 Let us start the Linux booting process with BIOS.

In this article, I am explaining the Linux booting process with BIOS as the first steps. Not based on UEFI. Both UEFI and BIOS are low-level software that starts when you boot your PC before booting your operating system, but UEFI is a more modern solution, supporting larger hard drives, faster boot times, more security features, and—conveniently—graphics and mouse cursors.

Alright, we can go ahead with BIOS. It is a pre-installed firmware on a system/server’s Mother board. BIOS controls the computer hardware. BIOS is used to perform hardware initialization during the booting process. The main job assigned to BIOS is POST (Power On Self Test). It’s a hardware self test. POST tests are simple read/write tests of a few location.

The POST tests are not much useful as a Hardware diagnostic test. It just test the system hardware components, and loads a boot loader.

Main responsibilities of BIOS during POST are listed below:

The beep sound after the POST indicate its result. A short beep while restart/start means normal POST – system is OK. Two short beeps means POST error – error code shown on screen and so on. Check POST manual for more details.

BIOS act as an intermediary between computer CPU and Input/Output devices. This eliminates the need for the operating system and software on the system/server are always aware about the details of hardware and other I/O devices. If any harddisks or I/O devices changed, only the BIOS needs to be updated.

BIOS is stored in EEPROM (Electrically Erasable Programmable ROM) / Flash memory. BIOS can not stored on a  hard disk or other devices, because it manages those devices.

BIOS is written in assembly language.

Remember, POST, that is the main thing happen at BIOS stage of booting. Next we can move to 1st boot loader stage, MBR stage.

Master Boot Record, is the first place where boot loaders begins to start. MBR is a 512 byte sector located in the first sector of hard disk. MBR contains both program code and partition table details. Please see the image added below: 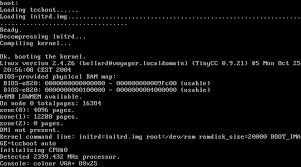 When allocating disk space for a partition, the first sector or data unit for each partition is always reserved for programmable code used in booting process. The very first sector of the hard disk is reserved for same purpose and it’s called the Master Boot Record. In case of a mechanical spinning disk, sector 1 of cylinder 0, head 0. 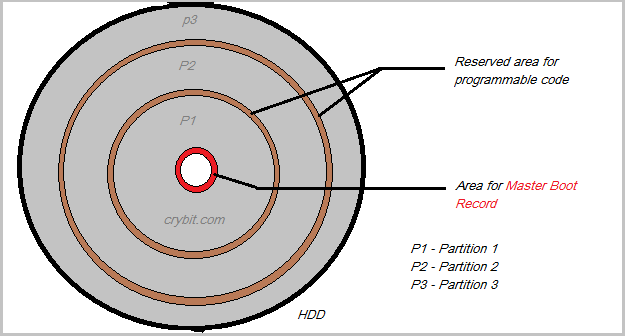 First 446 byte are the primary boot loader which contains both executable code and error message text.

Next 64 bytes contains the partition table. This section contains records for each of four partitions. In the above image P1 represents Partition 1, P2 for Partition 2 and so on.

The last two bytes known as magic number (0xAA55). This number is used for the validation check of MBR.

It is called the kernel loader. The main task at this stage is to load the Linux kernel.

We use GRUB, as LILO has some disadvantages. One great thing about GRUB is it has knowledge about the Linux file system. GRUB can load kernel from an ext2 or ext3 file system.

As we mentioned, the boot loader code is executing in different stages because of the size limit of MBR. This stages are different in different GRUB version. These stages are mainly listed as follows:

Stage 1 is an essential image used to boot up a Linux machine. Usually, this is embedded in an MBR or the boot sector of the partition. The maximum size of stage one image is 512 bytes, because of the MBR size limit.

Stage 1 does not understand file system. It loads stage 2 or stage 1.5 from local disk for further booting process. So it knows Linux file system details. 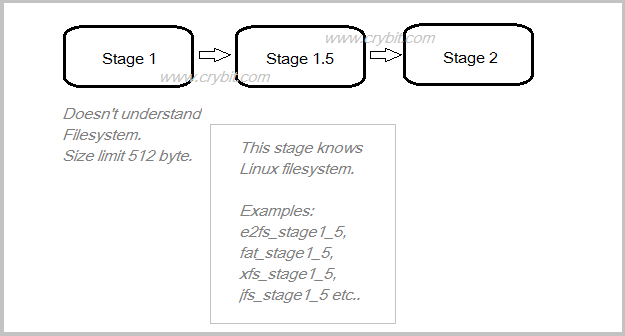 Stage 2, this is the core image of GRUB. Usually, you can find this stage in a file system (Not necessary). Stage 1.5 is actually a bridge between Stage 1 and Stage 2.  Stage 1.5 will be installed into an area right after the MBR area.

Boot loaders are loading from Stage 2. So you must know some basic details of Linux boot loaders. The common boot loaders in Linux are listed below:

Configuration file for LILO is /etc/lilo.conf and some configuration directives are listed below:

Commonly using boot loader is GRUB and its configuration is also listed under the etc folder.  GRUB has two versions. GRUB v1 and the latest GRUB v2. There are a lot of changes in these two versions of GRUB.

This is actually a link to /boot/grub2/grub.cfg. The main difference between GRUB v1 and GRUB v2 is, we can not edit the configuration file for changing the kernel and other settings. However, you can use different grub2-* commands for changing GRUB settings.

A sample configuration is pasted below:

It’s something complicated than GRUB v1. But we can manage it simply from command line. We will discuss about GRUB setting on a different article. It needs more space, LOL

Don’t forget, we are at stage 2 of Linux booting process

In stage 2, GRUB is loaded from a known location in boot file system (/boot/grub).

This stage loads other required drives and kernel modules before reading the GRUB configuration file and displaying the boot menu. The familiar GRUB menu is now displayed on the monitor. You can select the kernel from there. 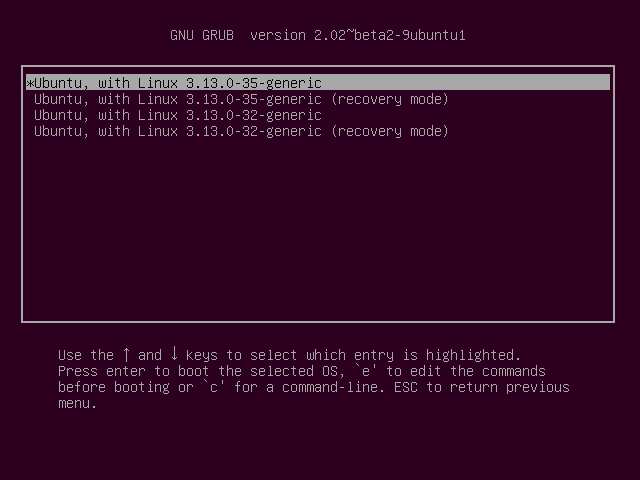 The kernel then starts to detect the system’s hardware. The root file system on disk takes over from the one in memory. The boot process then starts INIT (SYSTEMD) and the software daemons according to the Sys Admin’s settings. This can be done at next stages.

The kernel, once it is loaded in step 4, it finds init in sbin (/sbin/init) and executes it. [In RHEL/CentOS 7 /sbin/init is linked to ../lib/systemd/systemd]. When init starts, it become the first or parent process on your Linux machine/server.

The first thing init does is reading the initialization file, /etc/inittab. This instructs init to read an initial configuration script for the environment, which sets the path, starts swapping, checks the file systems, and so on. From the /etc/inittab system will find the run level selected and start services by looking in the appropriate rc directory for that run level.

This is only an introduction to Linux booting process. This can expand more, more and more…..

I will and some FAQ and more details of each steps in coming articles. Hope you enjoyed the booting process!!

For the time being, comment me if you have any questions.

How to Make Easy Money from Fantasy Cricket?

When it comes to new ways of earning easy money, fantasy cricket is hands down

The present market is packed with different options in laptops under Rs35000. This is a

There are lots of mediums of entertainment in the modern world. However, the day when

Amazing features you can expect in future smartphones

Smartphones have enhanced the entire format of the life. As the name indicates, these phones

Introduction The Apple of China or so it is called, Xiaomi certainly has a great

How to Make Easy Money from Fantasy Cricket?

When it comes to new ways of earning easy money, fantasy cricket is hands down

An office is a place where you cannot tolerate messiness, not even for a day.

There are vacuum cleaners for nearly every cleaning job, from cars, floors to wet spills.

COVID-19 has already left its mark on the world. Even after the pandemic, it is